Hello, it has been a while since I last wrote something on my blog.  It doesn’t mean that I stopped but only that I didn’t have much time the last weeks.  But I did continue to fine tune the car movements.

During my developments of the RP Driven Car, I was looking for a way to interface with the car.  Just a small interface which I can use to make it go forward, backward and steer.   The key features for the car itself are developed but I need urgently a way to call them in an easy and flexible way so I can test drive the car.  My first thought was to use standard input an use the arrows to control the car.  Problem with the standard input is that each time you pushed an arrow you also have to push the enter to make the arrow input visible and readable from the stream.  So instead of pushing for example the up arrow to go forward I had to push the up and enter.  Which is not really flexible.  I was looking for a solution to deal with that and apparently there is none.  There were some external libraries who could probably do that but I am not in favor of so called exotic code that I would only use once.  Than I came to the id of having a little GUI that could do the trick.  Why not ?  Maybe a little more complicated because of the additional complexity but I am always open to try new things.  I have written applications with a GUI in the past (almost long time ago 🙂 ) but those were Web applications.  Now I mainly do developments in middleware where there is no need for GUI’s.  So I see this as an opportunity to have a look at the technical possibilities to write an interface which will interface with the RP to control the car.  I quickly came at JavaFX.  I have heared about it already several times and at last years DEVOXX conference there was a demo using JavaFX to connect with a Raspberry Pi which worked very well.  That is why I want to try this also out.  I’ll need some time to read about it and start some tryouts to find out how exactly I will do this.  I have not thought yet whether I will setup a webservice on the RP or interface via RMI.  Everything is open.  First I will focus on the simple interface.  It should look like the screenshot here under.  As I said.  Very simple to start with. 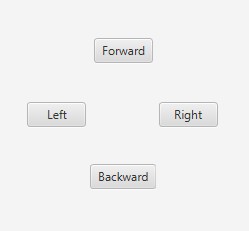